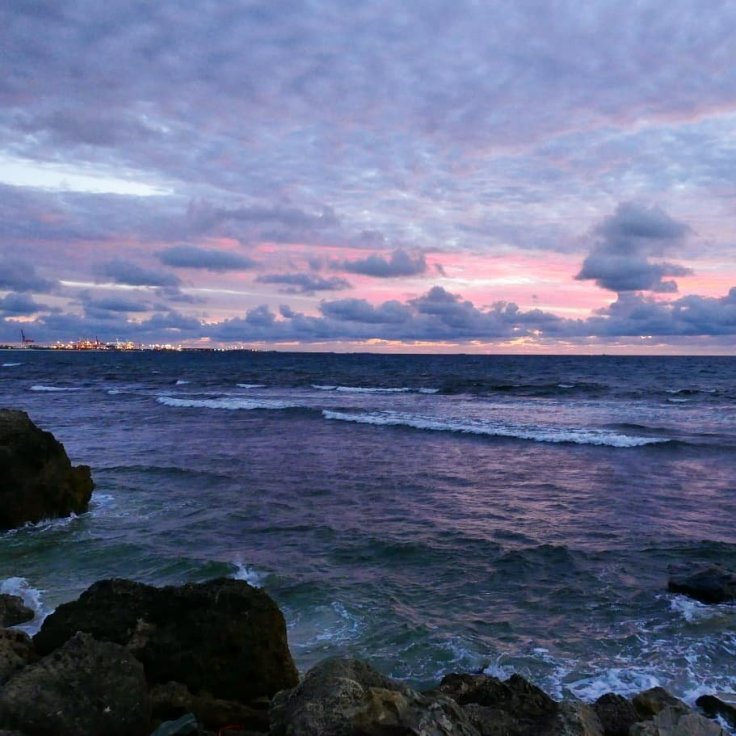 Did anyone manage to catch Sculptures by the Sea this year? It always seems to be on for such a short period of time. I missed it the last few years, but managed to catch it, along with the rest of Perth, on Friday night. It was so so busy. It was good to see so many people supporting art in our community, but it would also be great to have the exhibition go for another week or so, so it doesn’t get so crazy. Although thats probably coming from my Aussie upbringing, as soon as there are over a dozen people at anything we start sweating about ‘the crowds’.

Anyway, there were lots of good artworks there. Unfortunately the website doesn’t seem to have a full catalogue, and the tent was closed when we got there at night, so the following is my interpretation of the ones I saw. These were my favourites: 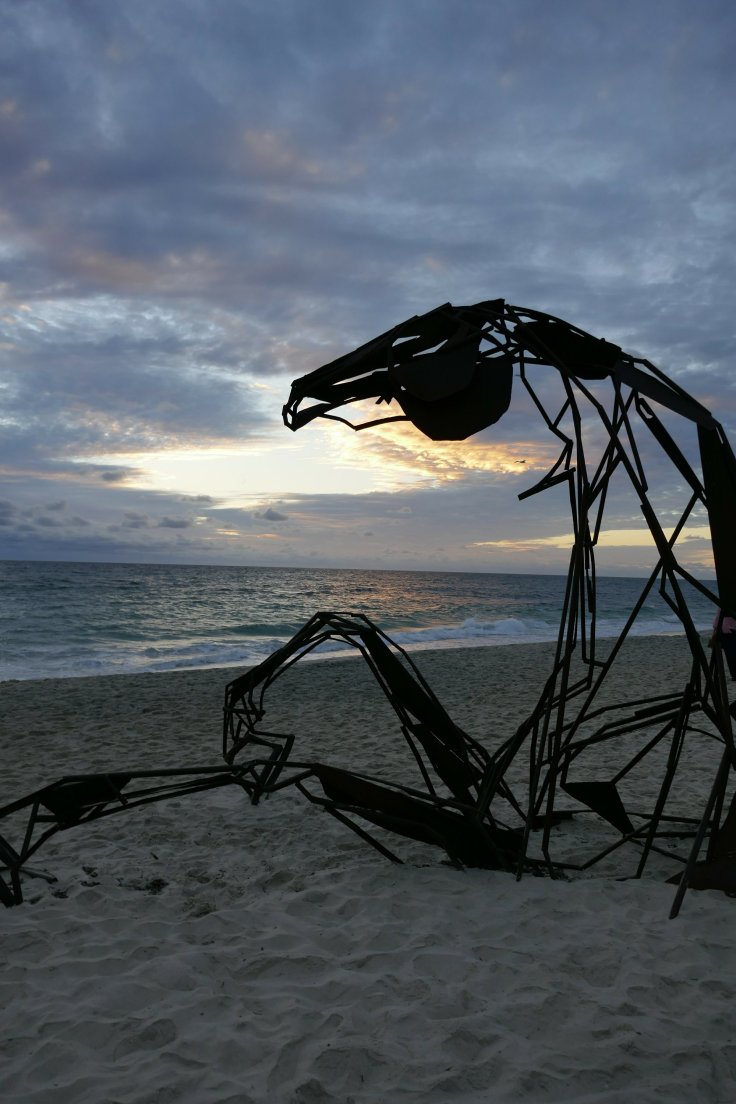 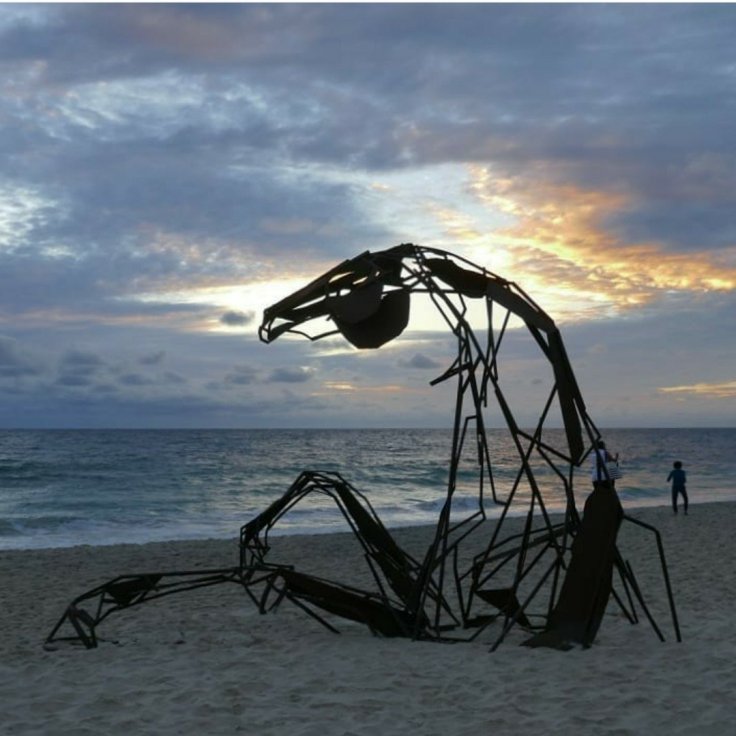 I loved the scale of this piece and the metal skeletal form coming out from the sand. It reflected the sunset beautifully and created an amazing silhouette. I like to think it captured the animal reaching up to freedom and new adventures, rather than being in a Never Ending Story quicksand situation… 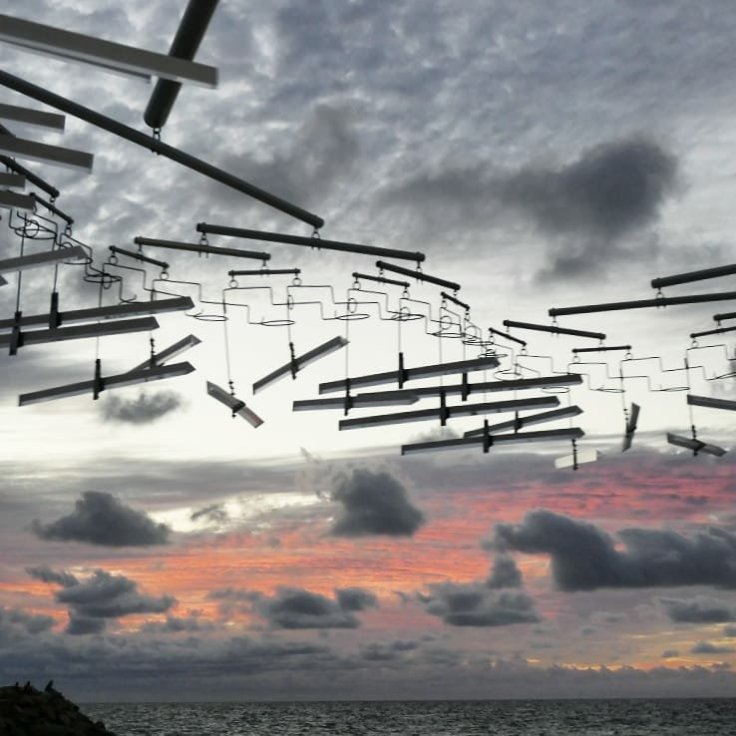 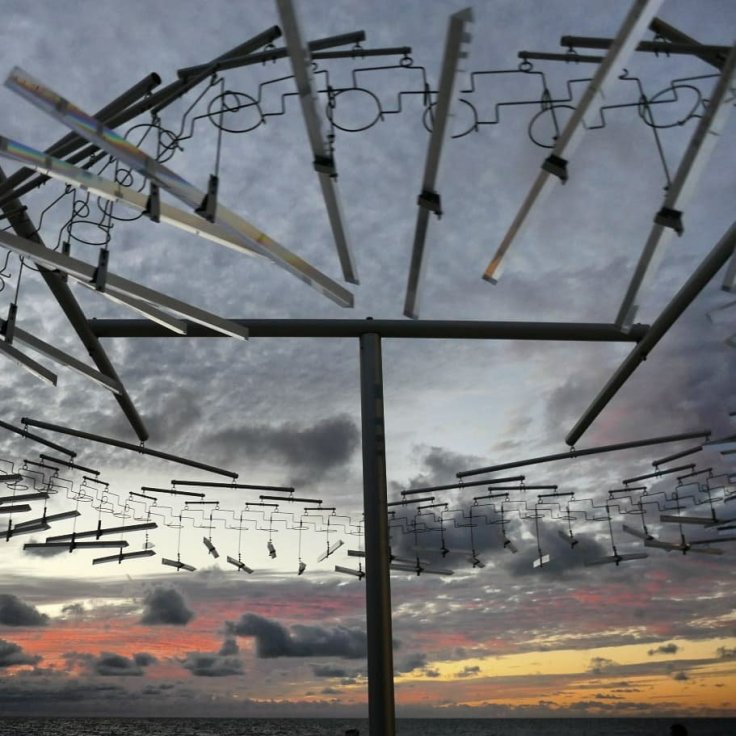 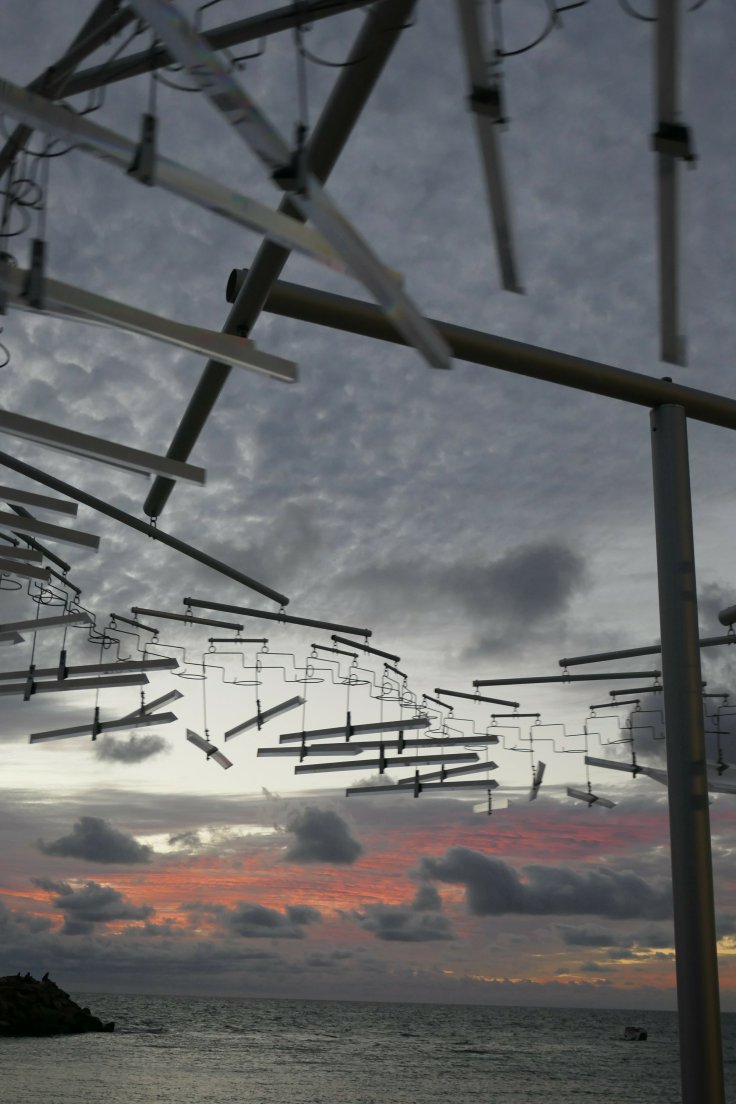 ‘In Rainbows’ by Duncan Stemler.

This piece moved in the wind and was quite mesmerising. The suspended pieces appeared to be glass or perspex prisms, so had a lovely quality of light. I liked the movement and lightness of this piece and the subtle connection back to the old Hills Hoist brought about some comfort and nostalgia, thinking about the good old days of swinging around the clothesline in the backyard.

‘Inspired by Rosie’ by Tania Spencer.

Another lovely metal piece, beautifully set in its environment creating a filigree silhouette against the ocean. I found this really calming and ordered, which must havw suited what I needed from art on that day!

‘We Are Between The Sun And The Earth’ by Masayuki Sugiyama.

Another delicate metal piece – I must have been in that frame of mind last Friday! I liked the different shapes this sculpture created from different vantage points and it’s shininess contrasting against the gritty sand and choppy ocean. It felt both large and small at the same time with a contrast between the curved shapes and the harsh metal construction. Apparently it’s shadows made circles on the sand but it was too dark by the time I got there to see that. 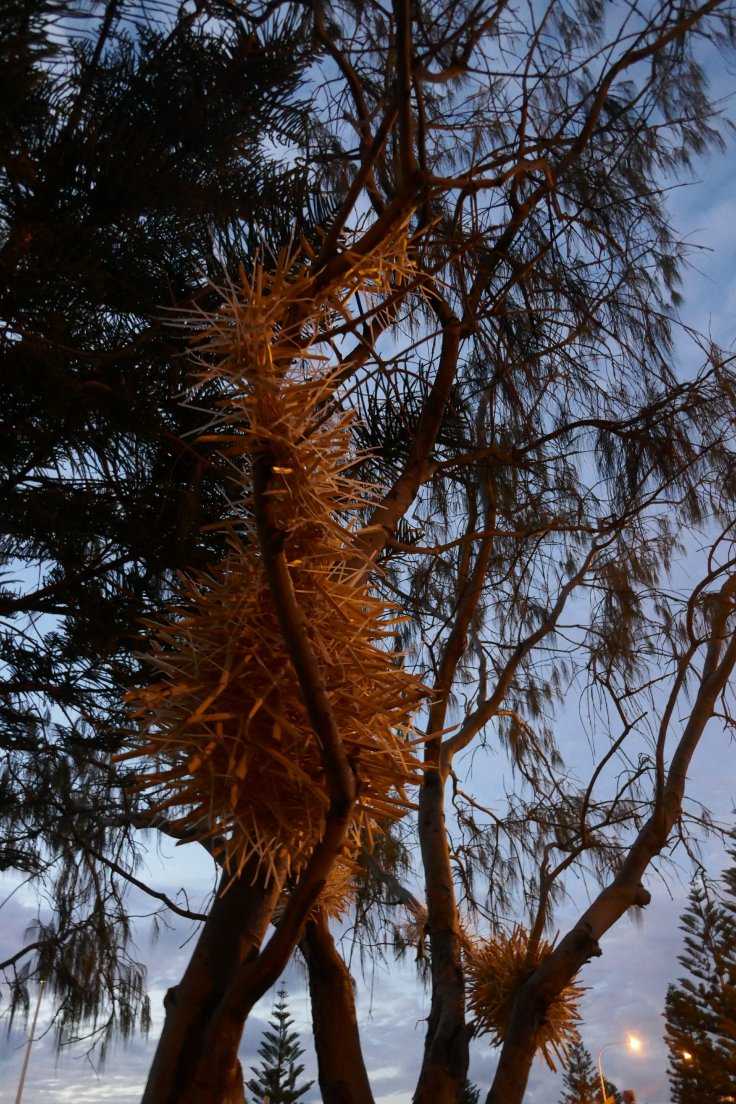 I love when things are not where or what you expect. At these kind of busy public events, you tend to look straight ahead or down, or follow eat the rest of the crowd is looking at. But this piece encouraged me to look up. I loved these spiky little straw creatures crawling their way up the tree and getting denser and lighter along the journey. They were unexpected and I thought quite different to anything else at the exhibition, with a real naturalistic aesthetic, as if they had just landed or grown. Really nice. 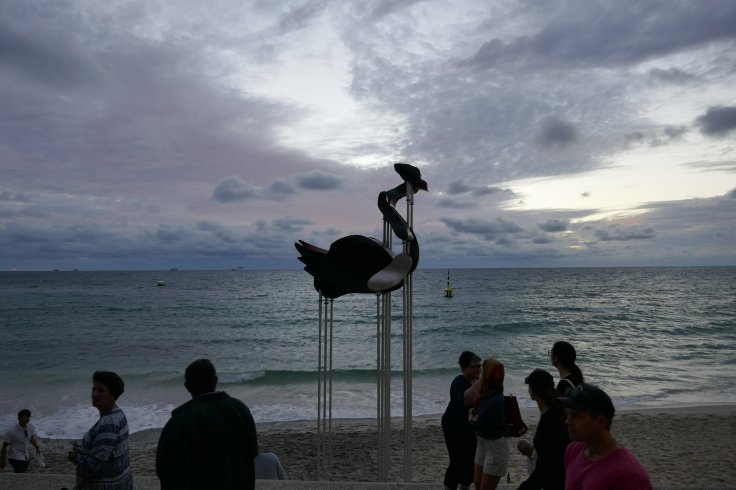 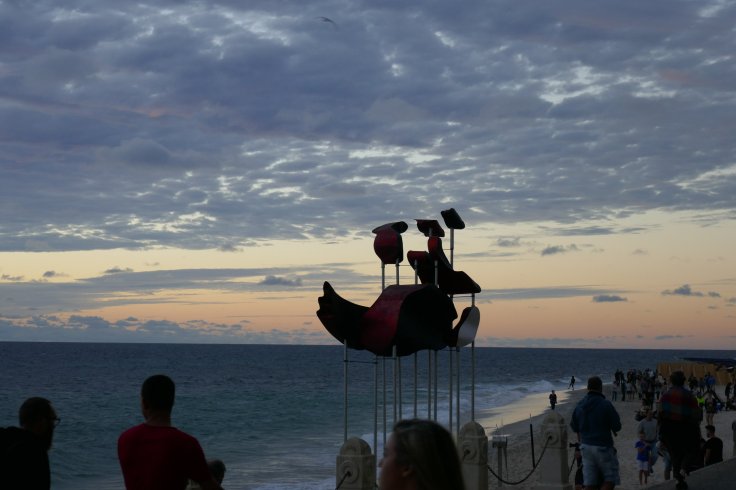 Another changing perspective metal sculpture, I really enjoyed the bulkiness of this piece from the side which melded away when viewed from the front. The stylised swan shape held up on delicate metal poles was a nice juxtaposition and the location was so considered such that the swan sat on the water. I’m not sure how much the artists know about their final artwork location while their designing their work, but I liked that this one really seemed to relate to its context. 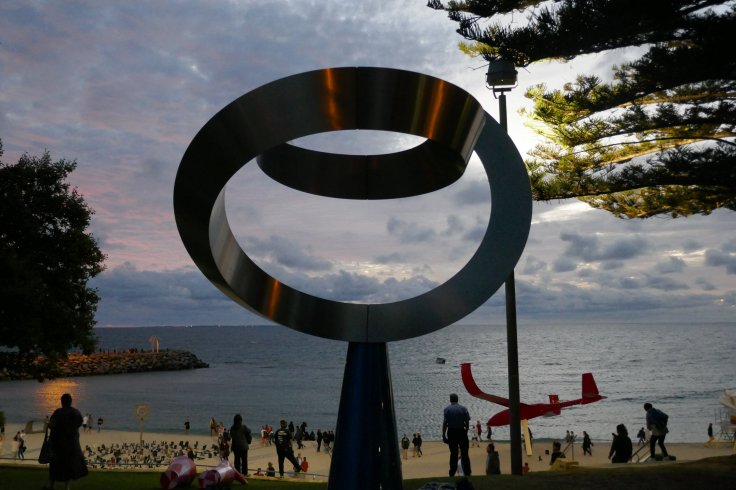 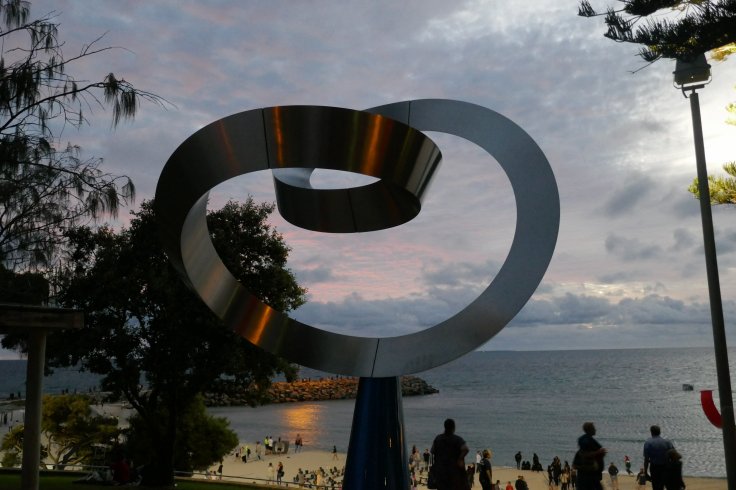 Because who doesn’t love the magic of a Moebius strip…?

There were many many more beautiful works but unfortunately there were just too many people to navigate through to see them all, and an early sunset meant a lot of them were hidden from view by the time we walked around. Will definitely have to try and get out of work earlier next year to check them out.

Because, also, you just can’t beat a cottesloe sunset… 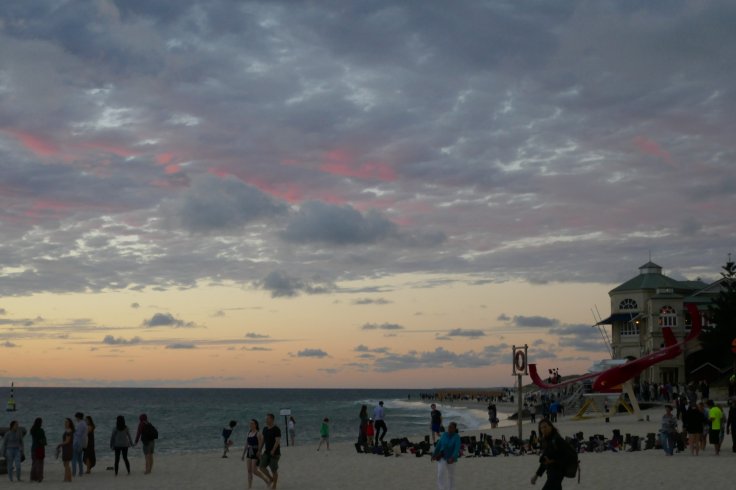 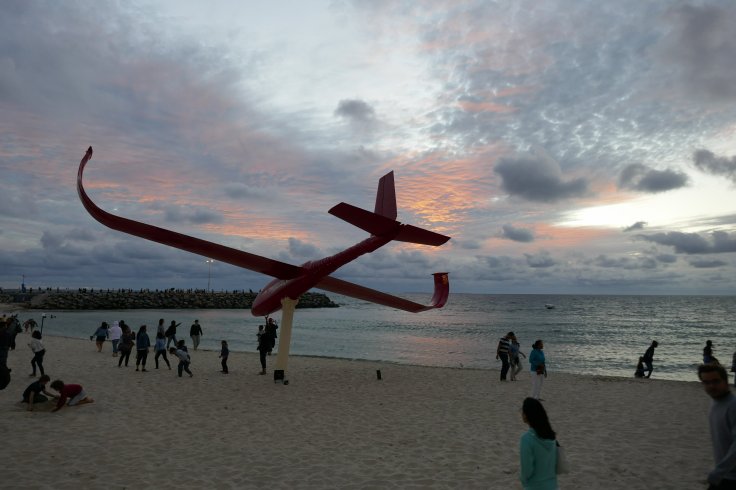 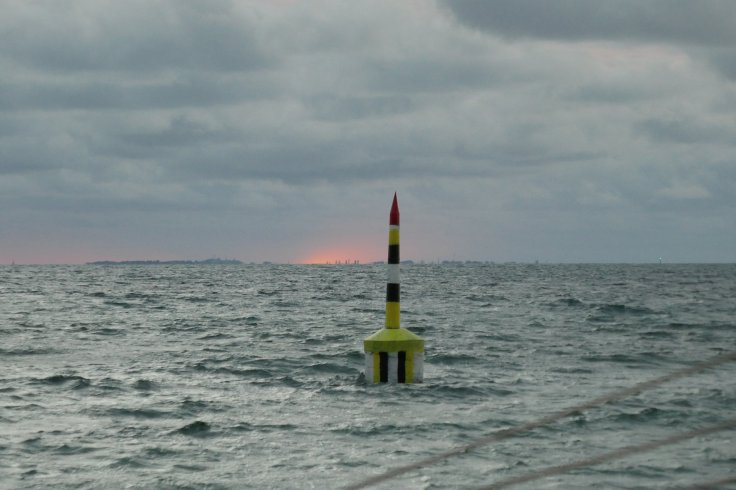 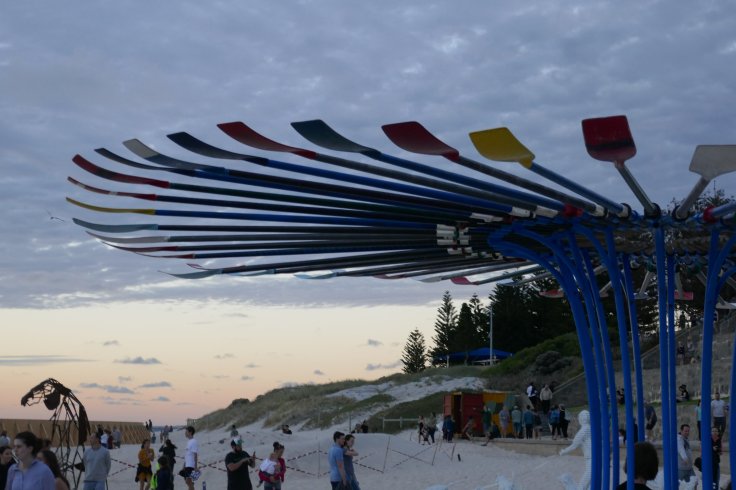 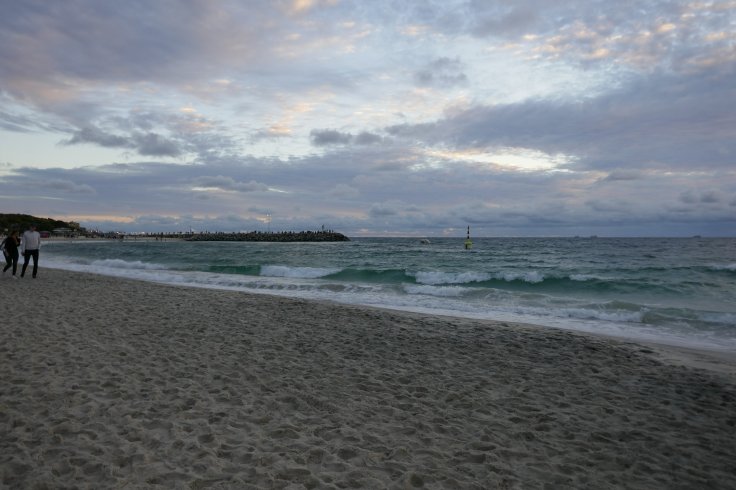 If you want to see some clearer (earlier in the day) photos of just some of the artworks, you can see more here.