Last time I attended a Regional Day Out, less than a year ago in Brisbane, I sent my partner an SMS saying ‘we should move to Brisbane, it’s so beautiful.’ Having recently made the tumultuous move to the other side of the country, it was with some trepidation that I headed off to the 2018 RDO, worried that another city would take my fancy. But no fear, this time I was just there for the education experience. And it was a enlightening one.

We started our day with Derek Scott, the principal of Haileybury College located in Melbourne (Keysborough, Brighton, Berwick and the city), China and Darwin. He spoke in depth of Haileybury’s vertical school recently opened in the CBD, an educational system that is a hot topic in most Aussie states at the moment. The school is retrofitted into an old office building and reflects the need, as in a lot of inner urban areas, for schools to accommodate the population increase of city residents. According to Derek, 100 government schools are required in Victoria in the next eight years. Additional to this will be about another third again for private education. There is a lot of growth expected and it’s been interesting to research how these particular challenges will be addressed. 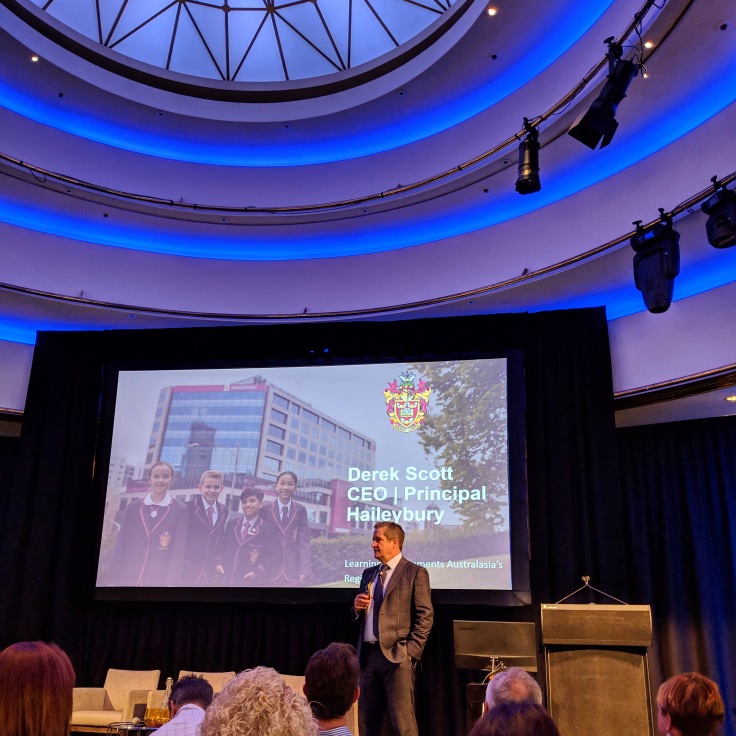 Much of the success of Haileybury in central Melbourne is due to the location. Haileybury put a lot of work into choosing this particular building, overlooking the Flagstaff Gardens parkland, after investigating multiple other options. As Derek noted ‘the only reason we got this building is because I failed four other times.’

In operation now for over a year, it was great to hear about some of the successes of Melbourne’s most recent vertical school. Most of the successes of this schooling method has come down to culture, for example providing free public transport to all staff, integrating the curriculum into the city through enhanced learning opportunities, and utilising the school as a community hub, as within highly densified areas it is often the only community space available to residents. Haileybury encourages public amenity on the ground floor with openness within a cafe space and meeting areas for parents and visitors. It was interesting to hear about the curriculum integration possibilities of this school. Oftentimes we hear from staff that they feel bound by sitting within the official curriculum framework, but schools like this show that it is possible to complete education in a different way, while still complying with all requirements. This gives me hope that the curriculum can be a springboard, rather than just a tether.

Next, we had a panel of four educators, starting with Julie Large of Carlton Primary School, currently going through a renovation project. This redevelopment is happening within a challenging environment, with a low socioeconomic school community and a projected four-fold increase in student numbers. Many students have not spoken English before they start at Pre-Primary, but have caught up with other students by the end of Year 3, which is an amazing testament to the work this school is doing. With a staff turnover of 30% it was important for the school to take everyone on the journey, which included staff visiting other flexible learning spaces and describing the new works to parents via pictures rather than jargon-rich texts due to the number of ESL residents. The new spaces, currently in construction, look like they are going to be fantastic when finished, and are going to make a massive difference to the local community.

Debby Chaves from Beaumaris Secondary College showed us her very large inner-city new school, with large ovals maintained by the Melbourne Cricket Club, which means they are in use by the school during school times but in use by others during after school hours. And it’s not just the sporting fields but also gyms, learning areas and kitchens. Again, this is something we often hear is ‘impossible’, mixing users on a school site, but somehow it works here, and benefits the whole of the community. The design of Beaumaris is intended to prepare students for their future workforce eg learning how to moderate, concentrate and move in open plan spaces in preparation for the open plan office. I liked Debby’s description of the learning at her school: ‘We learn purposefully by cultivating curiosity, being reflective and making real-world connections.’

Noel Creece of the multi-award-winning South Melbourne PS spoke about this very recently-opened public primary school in a inner-urban area surrounded by roads and a tramline. There were some interesting aspects in this development as it is one of the first dealing with some particular vertical school issues such as how to get 4yo legs up and down four sets of stairs in just a few minutes between classes. Luckily, South Melbourne are using the advantages of their location with visits already from the local police and firies, and are learning to create community across the boundaries of an unfenced site, and between floor levels. Each floor plate is a large collaborative learning zone with raised decks, glass pods, amphitheatres, shelved enclosed zones and an external play zone. I’m looking forward to seeing these large flexible spaces in use with team teaching and multiple learning modalities in each area.

Vertical schooling is becoming a big issue in many states as our demography, culture and technology changes how and where we need to access education. And land availability is getting scarser, meaning schools need to go up. The four examples we saw today all have different challenges and opportunities, but all respond to these in innovative ways, with a forward thinking approach to delivering education in open, connected, flexible environments. I’m looking forward to seeing how other locations take up this same challenge over the coming years of rapid change.

After the enlightening discussion on the morning we all headed off to our respective site visits. Read about what I saw here.

One thought on “2018 LEA Regional Day Out – Inner City Schooling”