After hearing about the many opportunities brought about by inner city education from Melbourne school principals in the morning, the delegation of LEA’s RDO headed off to visit some sites. It’s always a tricky concept selecting your site explorations months in advance, then trying to remember what you picked, then crossing your fingers that’s it’s going to be worthwhile. It’s risky business. Luckily for me this year it paid off as I visited two really interesting tertiary education facilities. 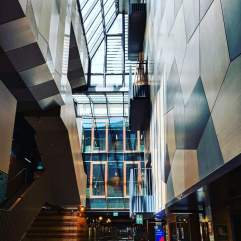 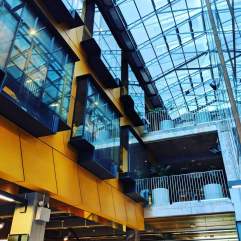 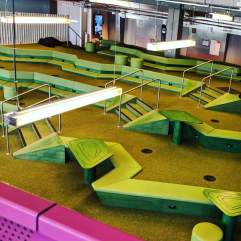 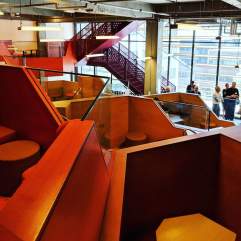 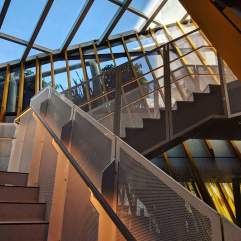 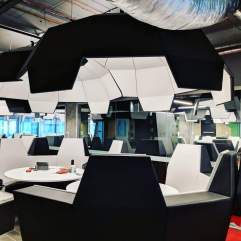 First up, we caught the tram to RMIT where we walked through the renovation of three existing concrete framed buildings. The renovation was done in a really interesting way, with the brief from the University that the buildings were to be open and flexible and generally used as a ‘sticky’ campus ie to get students to stay on site between, before and after classes. I believe universities in particular are struggling against the advance of digital learning, MOOCs, online campuses, and student’s economic restrictions meaning more need to work around class-time, rather than the other way around. So this campus ‘stickiness’ is a way to develop community and personal interaction, something that was invaluable in getting me through my university degrees, so many years ago. This people-centred driver has resulted in a range of study spaces, from individual pods to small working zones, to a large lazing ‘lawn’ space for hundreds. It was an interesting built response to the concept.

Another part of the idea of wanting a variety of spaces was recognising the inner-city nature of the campus. Many students live in very small accommodation, or live quite far away. These spaces provided a place for them to catch up with friends, entertain, even cook (well, microwave). This added amenity provided another layer to the spaces as a cultural connector within the city.

An important part of the construct of the design is the feeling of the campus as an urban street. To achieve this, Lyons collaborated with (and managed) four other architecture firms including MvS Architects, NMBW Architects, Harrison White amd Maddison Architects, as well as landscape architects Taylor Cullity Leathlen, so that each part of the development differed to the next, just like an urban street. It worked really well. Walking down the ‘academic street’ was a vibrant journey past timber clad lining, curved mirror facades and steel cantilevered window boxes, which gave a beautiful sense of diversity to the feel of what would otherwise be a long corridor.

Internally, we mostly made our way through Lyons’ casual meeting zone spaces. There was such a mixture of spaces here and they reused the large open floorplates really well. Having large volumes meant that most spaces could take advantage of different changes in floor levels, and degrees of openness and enclosure to facilitate different studying opportunities. We visited the campus during uni holidays but the spaces were still occupied with students learning, working, eating, (and one sleeping), meeting and sharing. I think the success of this project lies in the ability of the spaces to be so many different things to different people. 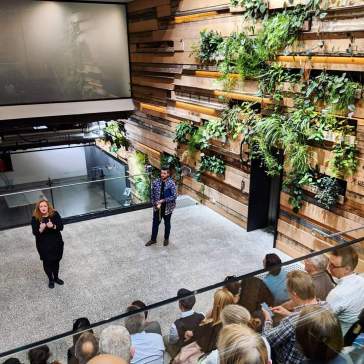 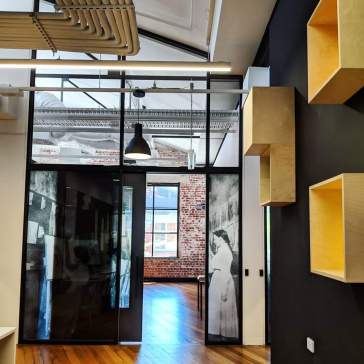 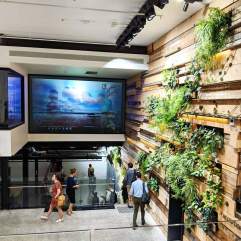 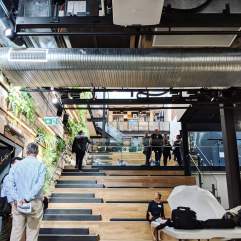 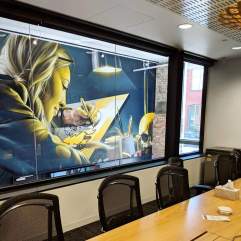 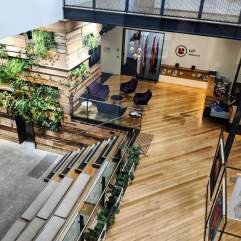 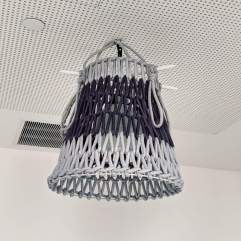 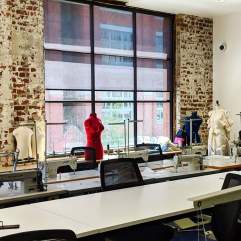 My second visit of the day was to LCI Melbourne, a creative industries institution where students learn interior design, graphics, photography, fashion design, communications and visual arts. This renovation of an old Foy and Gibson warehouse by Gray Puksand was stunning. Enough of the built fabric remains, like the red brick, sawtooth roof, large windows and underground parking to create a ephemeral connection to the legacy of the place within the city’s warehouse precinct.

However the new insertion of spaces is where the architecture really shines. Directly correlating to its creative clientele, the new spaces include a central exhibition pod and stark white walls with glazed partitions revealing heritage photos of the building’s previous use.

The most striking feature was the use of the whole space, in that you can see from the basement gallery level all the way up to the exhibitions on the second floor. You get the feeling that all the creative users are inextricably linked – graphics with photography with visual arts with fashion. The feeling that all students are connected as part of their pursuits, while also still having their respective quiet zones for individual work, made this space unique in a way I hadn’t seen before.

From a big branding perspective too, there are some amazing initiatives that really ignite the space. On entry is an incredible oversize street art piece, of a ‘typical’ student. This piece seems to glow against the dark background and the other white walls. The entry amphitheatre, surrounded by a stunning living green wall within reused timber cladding, creates a bold sense of wonder upon entering the school. A final last detail I really liked was the back-lit window at the upper level, providing the function of closing off the staff areas from the students areas when needed, and acting as a projector screen for the amphitheatre. It was a really neat functional element equally providing connection and separation.

Both the tertiary site visits were really well articulated, and perfectly responded to their inner-city sites in uniquely different ways. Creating space for students which assists their social learning, not just their academic learning, is a vital requirement in our changing culture. I think both of these visits achieved this in a really successful way.

One thought on “Tertiary Education Explorations in Melbourne”

I like to sketch, and paint, and photograph, and write about the random events happening in my life. This is a compilation of those thoughts.